Welcome to the Rustoria guide on Tools in Rust. There are several tools that you will craft and use whilst playing Rust, some of which are better than others. Read our guide below to find out which tools you need and how you make them.

The rock is the first and most basic tool you will come across in Rust. Waking up alone and scared on a dark beach, the rock is your first friend. Just try not to accidentally throw it into the ocean, okay?

You will need this tool in order to gather the materials required to gather resources and begin crafting more tools. 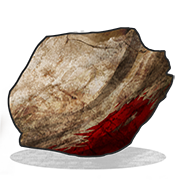 The rock is, well… it’s a rock. You hit things with it, you get resources. Not many, but still something. It’s free, which is good! Might want to upgrade it though…

It should also be mentioned that you can craft these. If you really wanted to… I mean.

In addition to your glorious rock, you are also given a torch upon spawning into Rust. This is good, because it’s horrifically dark at night so hold onto this… There’s not much else to say about the torch really. It lights up dark areas. 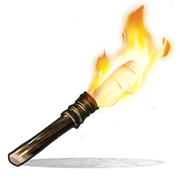 The torch can be a real live-saver earlier in the game, allowing you to efficiently navigate around whilst collecting resources. Please note that you essentially have a sign above your head saying “kill me now” when you use this as it is unfortunately (or fortunately, depending on how you look at it) very bright.

Although this is not actually given to you upon your first spawn, it is recommended that you gather some materials and craft both this and a building plan as early as possible. This tool can save you a lot of time earlier on as it allows you to upgrade any structures you make, and building a little wooden prison for yourself to call home is better than being beaten to death by a rock, or mauled by a bear! 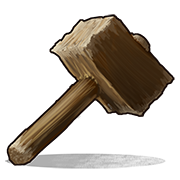 It’s a hammer for upgrading buildings made using a building plan… What more can I say? You can’t even kill people with it, sadly… It’s a fast tool, and is very cheap.

The stone pickaxe is your first step into becoming slightly less of a caveman than you were previously. I mean, it’s better than your rock and will help you to mine ore nodes much quicker than you previously could. 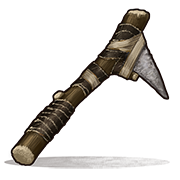 It’s quicker than a rock, thank God! You can also throw this at people and pray that it kills them as it honestly doesn’t do much damage. These also have an 8% drop chance from a Minecart or Mine Crate. They are cheap to craft, and once you have one of these you can use it to gather the resources to craft more.

The stone hatchet should be your first step into becoming slightly less of a caveman than you were previously, after the stone pickaxe. Again, it’s not amazing, but it will help you cut down trees quicker. 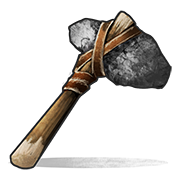 Again, it’s better than a rock and can be thrown, so there’s that… It can also be found in a Minecart of Mine Crate. Again, once you have made one of these you can use it to craft more without having to use a rock.

It’s time to upgrade! Finally farming enough resources to upgrade from stone tools to metal tools is like upgrading from a bicycle to a car. It’s a great feeling! Although they cost a reasonable amount of resources, they are definitely worth it as they allow you to gather resources much quicker than you would previously. It’s worth noting that stone tools are still good as you can make them in a hurry, but they definitely don’t replace a good metal tool.

Hurrah, you’ve made it! If you’ve reached this stage, you can finally make a half-decent tool to really help you with all those base upgrades that you could really benefit from doing! 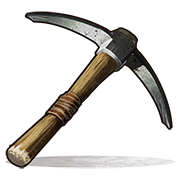 Now this is what you call an upgrade! It’s very quick, gives a high number of resources and will also help you to brutally murder players with no armor in around three hits. Sadly, it’s not as quick as a salvaged ice pick, but it’s close!

Again, congratulations! You’ve almost made it to the top tier of gathering and can now become a woodcutting machine! It’ll cost you metal fragments as will the pickaxe, but it’s worth it! 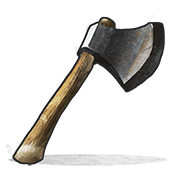 Again, this is what you call an upgrade! It will allow you to fell a tree extremely effectively. Sadly, it’s still not as quick as the salvaged tools though. It has a very satisfying noise, if that convinces you to craft one?

You’ve made it… sort of! Salvaged tools are the best manual tools in the game, although this is the point at which you start encountering tools with a component cost. Sadly, salvaged tools all cost some form of component. Check out our guides on monuments here to see which spots are best for gathering components.

You are now a machine! The salvaged icepick is an extremely fast tool, allowing you to gather resources at a very fast rate. They are crafted using components sadly, but can also be rarely found in most of the loot crates in the game. It also does 40 damage per hit, so it’s quite a viable weapon! 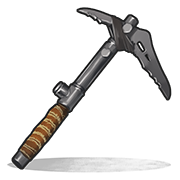 The salvaged axe is an extremely fast tool, allowing you to gather resources at a very fast rate. They are crafted using components sadly, but can also be rarely found in most of the loot crates in the game. It also does 40 damage per hit, so it’s quite a viable weapon! 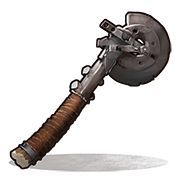 It’s a super quick tool! It does cost components sadly and you do have to find the blueprints required, but it’s worth it when you do manage to find these as it really does save you a lot of time when gathering.

This is an honorable mention. It’s essentially your rock on steroids. It’s not as quick as harvesting as the other salvaged tools, but allows you to gather both. It is considered to be the best tool for melee raiding sheet metal doors. 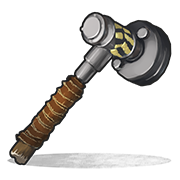 It’s slow, which really sucks. It’s good for raiding sheet metal doors too. The best part though, it it makes a beautiful BONK noise when you hit a player with it. If you are a great lover of bludgeoning people to death with rocks and other blunt objects, then this is the tool for you!

While the Chainsaw is not a common item, it is extremely effective at gathering wood. You are not required to hit a weak spot on the tree in order to collect wood and it is faster than both the salvaged axe and the hatchet. It can be found rarely in crates with a drop rate of 3% or lower, depending on the crate. It can also be crafted if the blueprint has been learnt. 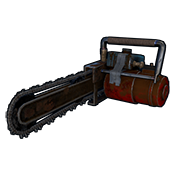 It’s an amazing method of harvesting wood, despite the cost of making it. If you’re lucky enough to find one of these and manage to acquire a blueprint, it is definitely worth crafting at least one of these. They’re also fairly good for raiding, although a downside of this is that they lose durability very quickly.

You look terrifying though… So I mean that’s worth it, right?

As with the chainsaw, the Jackhammer is not a common item. It is extremely effective at gathering ore and stone and you are not required to aim for any weak spots. It does not require fuel as is the case with the chainsaw, making it great if you manage to find one as you can replenish it for free at a workbench. This has a lower drop rate, around 1% or lower depending on the crate. 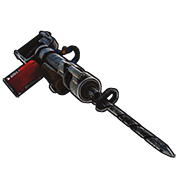 This is not a craft-able item

It’s an amazing method of harvesting stone, despite the cost of making it. If you’re lucky enough to find one of these then it is definitely worth using to gather ore and stone quickly.

It also makes one hell of a noise, so be careful! I mean, why wouldn’t you be… They’re rare!