Welcome to our guide on Vehicles in Rust. Whether they’re big or whether they’re small, all have been included! An example of some of the vehicles that will be covered are boats, mini-copters and horses!

One of the most common vehicles encountered whilst playing Rust is the horse. They are a non-hostile animal and spawn practically everywhere on procedurally generated maps. If you manage to find one of these beauties, a horse can be extremely useful as they are faster than running and can be found commonly meaning they are easier to obtain than the flying vehicles in the game.

Horses aren’t just useful as a vehicle. That beautiful steed can also be sacrificed and used as a meat-shield against many of the earlier weapons in the game. If you’re very crafty, horses may be used as shields against turrets and roof campers as they will not move without a player controlling them. You can also feed your horse with items or at a trough to heal it so you can force the poor thing to be a meat shield for longer.

You can simply walk up to a horse and ride them. Simple, right? Once you have managed to find and mount a horse, they can be ridden indefinitely using WASD to control them. Horses will also sprint, but this will sadly cost you stamina. The stamina of a horse will recharge slowly whilst the horse is resting or is running normally. Sadly though, the amount of total stamina a horse has will decrease over time, the more you use it.

It should also be noted that you can look down at a horse whilst riding it and press the interact key (default e) to see the horses breed, stamina, max speed and health. This is important as there are various breeds, some of which are slightly faster or more durable than others. You can also view these details whilst pointing your crosshair at any point on a horse, other than the saddle. If you hold the interact key, a selection wheel will appear which allows you to ride, examine or lead the horse.

There are several breeds of horse that function as vehicles in Rust. This may not matter to some people, but for those who like an edge in everything they do the breed of the horse is important as it can also mean that it is faster and more durable. Below is a table showing the different breeds of horse and their speed, stamina and health. Hopefully, this’ll help you get that edge that you need and stay away from those god-forsaken bush campers!

This is the first piece of armour you will craft for a horse. That’s if you care enough to craft your loyal companion some protection. It will provide above average protection to the horse itself when it comes to projectile, radiation and melee. It will also provide the rider with average protection to projectiles, explosions and animal bites, but that’s about it. I mean, I wouldn’t get hit by a rocket or walk into any C4 though, otherwise you’ll still end up looking like red mist.

Here is the crafting recipe for the wooden horse armour. 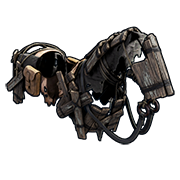 It should be noted that this recipe requires a level 1 workbench.

The road sign horse armour is the only other protection that can be crafted for the horse currently, and while it will cost slightly more than the wooden armour, it’s sort of worth it in my opinion. It offers roughly the same protection to your horse as the previous tier although again, I wouldn’t be running into rockets with it. The benefit of this tier of armour is that it provides significantly more protection than the previous tier when it comes to projectiles.

It’ll also provide slightly more protection against explosions and animal bites, but only 3% better than the previous tier. It is also worth noting that this armour weighs more than the wooden tier, so I recommend trying to find one of the faster horse breeds before crafting this tier.

Again, here is the recipe for this tier of horse armour. 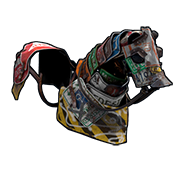 It should be noted that this recipe requires a level 2 workbench.

The Motor Rowboat is one of the first vehicles that you are granted access to in Rust. Arguably, it’s not accessible as early as the horse, simply because it requires low grade fuel unlike horses. If you do have a little bit of low grade fuel available to you though, the Motor Rowboat can be a great asset as it can be used to navigate to the various clumps of floating debris. This means you have easy access to the loot boxes that spawn here quite early in your Rust experience. 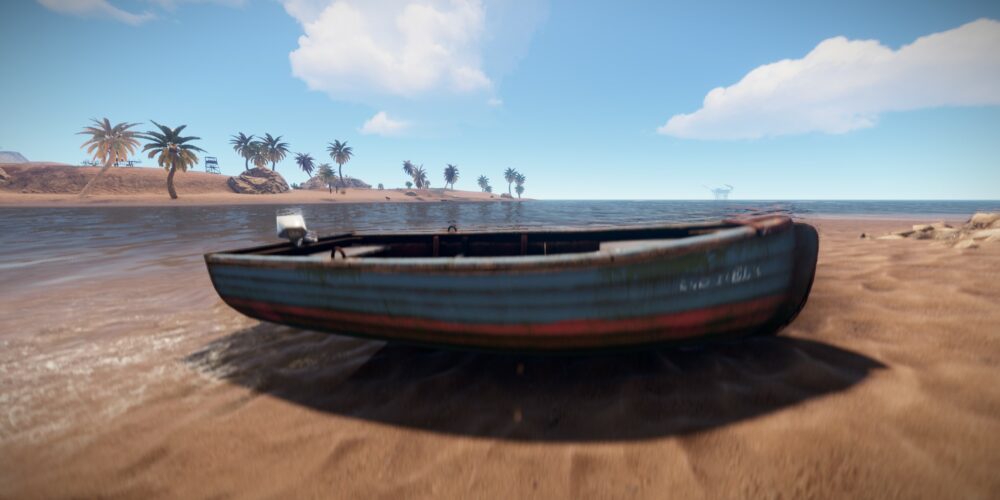 In addition to the above, having a Motor Rowboat is sort of a requirement as it is one of the easiest ways to access the off-shore oil rigs that are randomly generated around the edges of the map. The only other method of travel that grants this sort of access are the two helicopters, if you’re lucky enough to find or own one. Seriously though, if you can get one of these, do it! They look cool, they sound cool; and they don’t even need to be crafted, the boats will spawn randomly around the map edges.

Sadly as I mentioned, they do use low grade fuel. They’re extremely cheap to fuel if you have a small amount of spare. It’s not too difficult to craft these days though… just hit a few oil drums and turn it into low grade fuel, easy right?

In terms of fuel usage, per hour the boat will cost you 360 low grade fuel. See, that’s not so bad is it!? You might want to make an off-shore base and park one of these beauties in there though, so nobody “borrows” yours and doesn’t return it.

Just say RHIB… it’s less of a mouth-full. The RHIB is very much the same as the Motor Rowboat, but is the faster aquatic vehicle in Rust. It can seat up to seven people and has a bullet-proof windshield. It should also be noted that is uses quite a bit more fuel than the Motor Rowboat, and will cost you around 900 low grade fuel per hour in order to keep this on the water. I recommend killing someone and stealing theirs. Just saving some money, nothing wrong with that right? 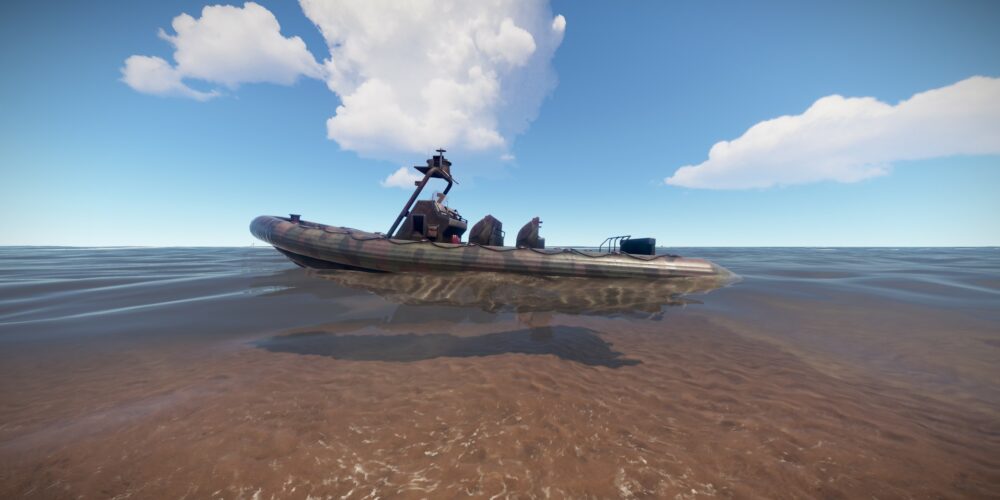 The main difference between the RHIB and the Motor Rowboat is that the RHIB is much faster but has much slower turning, meaning that if you must turn to avoid something, the boat might end up being blown up by other players. In addition, the RHIB also has a small storage box located at the front which will allow you to store items if you really wanted to… I mean, I wouldn’t leave my wallet in my car; would you?

The mini-copter is another early-game vehicle found in Rust. It’s not strictly a super early-game vehicle, so don’t murder your horse just yet! It can however, be found reasonably easily on roads and near monuments. Again, don’t get your hopes up about having one of these early on, as it may be easy to find, but it isn’t as easy to fuel or use at first.

The mini-copter can be repaired using a Hammer and requires 250 metal fragments to fully repair. It is also a two-man vehicle, with a passenger seat in front of the driver. 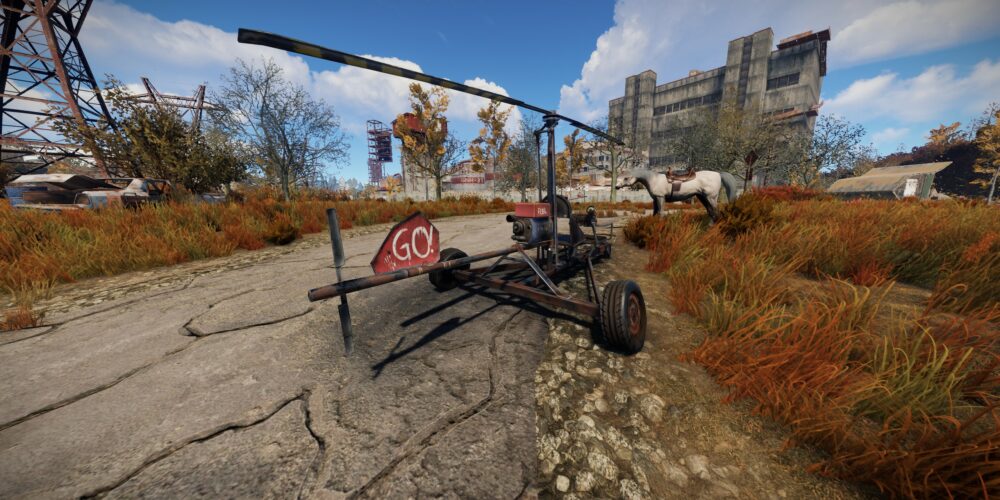 That’s right, it uses fuel! This is the main reason that it shouldn’t be considered a super early-game vehicle as it requires low-grade fuel in order for it to work. It uses around 30 low-grade fuel per minute which is completely fine on modded servers with higher gather rates, but may take you slightly longer to gather an adequate amount on a vanilla server. That being said, just hit a few red oil drums and you’ll be fine…

If you’re hoping to use one of these beauties for a reasonably long time, then I would recommend focusing on collecting low-grade fuel for a while, as it consumes 1800 low-grade fuel per hour. It should also be noted that if you choose to store your fuel in the mini-copter, you should consider building a garage or helipad for it, as the fuel tank can be accessed by anyone who can get close enough. Yeah, that sucks…

The mini-copter is fairly easy to fly but is difficult to master, so don’t be too cocky as you’ll end up being a kamikaze pilot instead of getting anywhere. It also adds a little interface on to your health bar so you can keep track of it’s health. It looks like this, and is the same for both the Mini-copter and the Scrap Transport Helicopter. 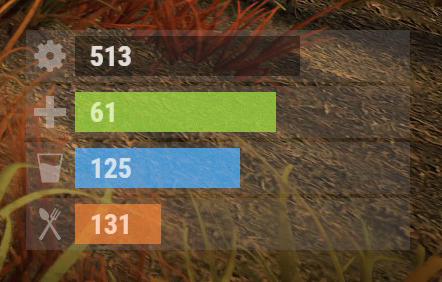 The controls of the mini-copter as as shown below.

On paper, these look fairly simple but again, don’t be cocky! Holding W will start up the engine and allow you to take off. That’s the easy part out of the way. Once you have begun to take off, you have to use the mouse and the keys together to successfully pilot a mini-copter.

In order to make it easier to visualize, here is a video of a mini-copter being piloted around a short distance.

Once you have reached your destination (or crashed trying…) you can exit a mini-copter by pressing the space-bar.

If you’re looking for mass transport, you’ve found it! The Scrap Transport Helicopter was introduced in mid-2019 and is the first vehicle to allow both player and vehicle transport, as it allows players to transport other objects such as the rowboat. In some aspects, it is similar to the hot air balloon as it does not have a requirement that players should be mounted in order to fly. It should be noted that this helicopter is more metal-hungry, and takes 750 metal fragments to fully repair it.

The Scrap Transport Helicopter is designed to transport multiple people or objects across large distances safely… sort of; it can still be shot down by players and SAM sites, so there’s that. The Scrap Transport Helicopter can be found randomly around the map with the number of spawns controlled by the server. It is extremely useful for transporting players to and from raids as you can squeeze roughly 20 players into one, in addition to the pilot and co-pilot.

The flight controls are in essence the same as the Mini-copter. To avoid damaging your eyes by spending all day reading this article, here is a link back to the Mini-copter guide.

It’s not quite “around the world in 80-days” but can be effectively used to raid bases as it can fit roughly 4-5 players in comfortably, meaning it is an extremely cheap and viable method of raiding. Be warned though, you can easily push your friends out or have your head taken off, as there is not much protection inside the balloon basket. 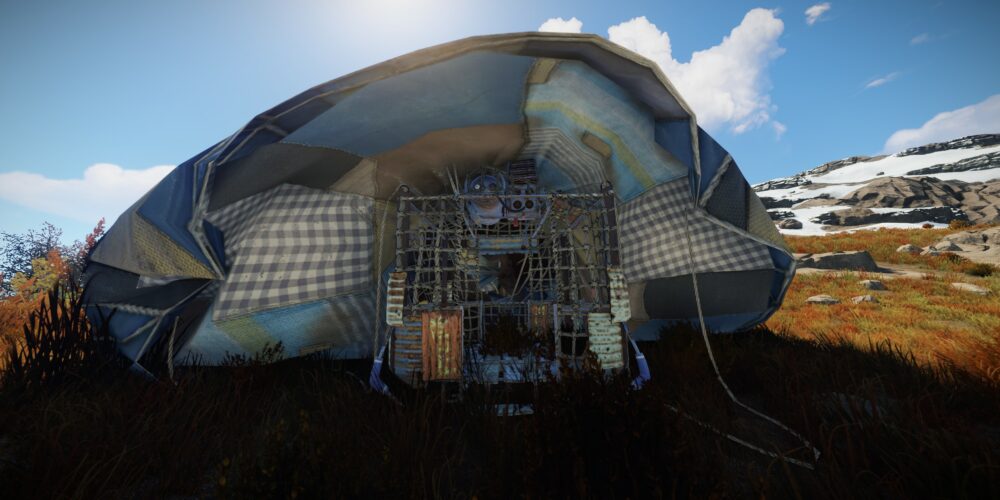 The Hot Air Balloon uses around 5 low grade fuel per second; up to 900 per hour, and requires about the same in order to initially take off, so it’s fairly cheap! I mean, for a death-trap… You’re gonna’ die!

The Hot Air Balloon is fairly difficult to fly. Once you have entered the Hot Air Balloon, you simply look up and press E to activate the thrust and allow the balloon to fill up. The Hot Air Balloon will begin to rise into the air and can then be controlled by using the four red flags positioned around the outside of the balloon to work out which direction you are going in. This, combined with turning the thrust on and off repeatedly will allow you to move in the direction you would like to go. Seriously though, use a Mini-Copter instead. These things take a long time to master, so you’re going to die a lot.

Hopefully you found this guide informative. If you wish to check out more of our guides, click here!